open space was a initiating element of a long-term strategy for change in the leadership culture of a corporation in the FMCG sector.  the CEO, supported by the HR and other strategic departments agreed, that they do not want to introduce a model or any other kind of a ready solution they would implement in the whole company. they wanted to ask their people what works for them in their own leadership and the of their seniors and what they would need to work successfully in their teams and as a whole. 300 managers, including the whole board of the organisation were invited to spend a whole day discussing in small groups issues they find burning for the organisation and ones they are willing to share the responsibility for.

before we started the tension was high. the head of the HR department approached me with a lot of worry, whether the issues people will bring in will be sufficient and whether they will be appropriate. i guess we all know the moment, in situations where you decide to open up the discussions on strategic and hot topics, because you deeply believe the way of involving everybody in creating the fundament for it is the right thing, but just before it starts you get cold feet and want to call the whole thing off. holding the space it those moments i hold very precious.

after the introduction people did not wait even three second but jumped to their feet to write down their issues. they were cueing to the microphone for 40 minutes straight and raised exactly 100 issues, which made us run out of polish alphabet (which we used to mark the break-out spaces) and have to go for letters with diacritics, like “ą” and “ę”. 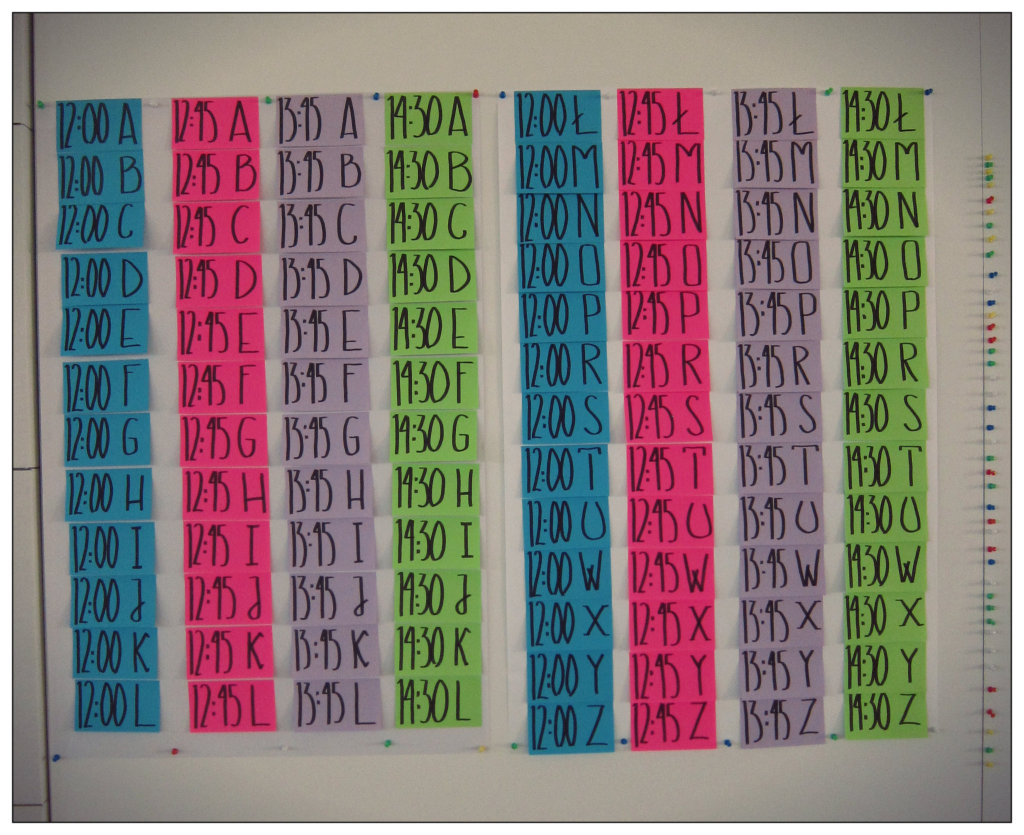 as we were doing the set-up one of the technicians brought in a large ladder, to help us hang up the title of the event. once we were done and cleaning up the space they wanted to take the ladder, to which i asked: “do not remove it, please. it will make for great pictures of the perfect circle.” and it did come in quite handy. the hired photographer spent basically the whole introduction to the open space occupying the very top of it. 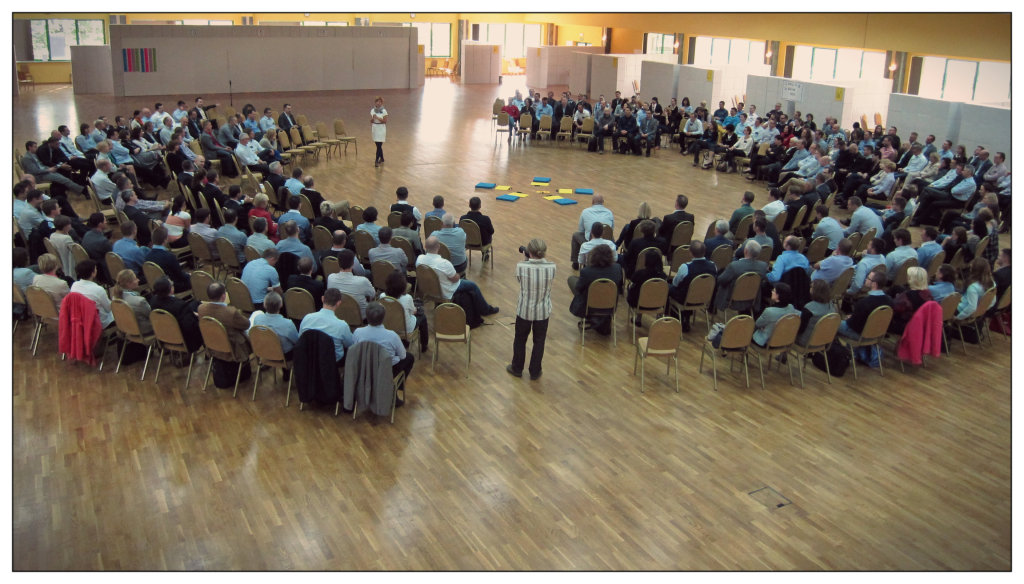 (you have to admit this really does not look like 300 people, now does it? this is why i like the circle so much. it is simple and elegant, and so much more)

very fast we all were able to see how well the method resonates with the crowd. people would bring up brave issues like: “what do i do if i am a boss of a team, in which i have better experts than myself? how do i fill the role of being a good boss?” or “how to be a good boss with people i personally do not like?” 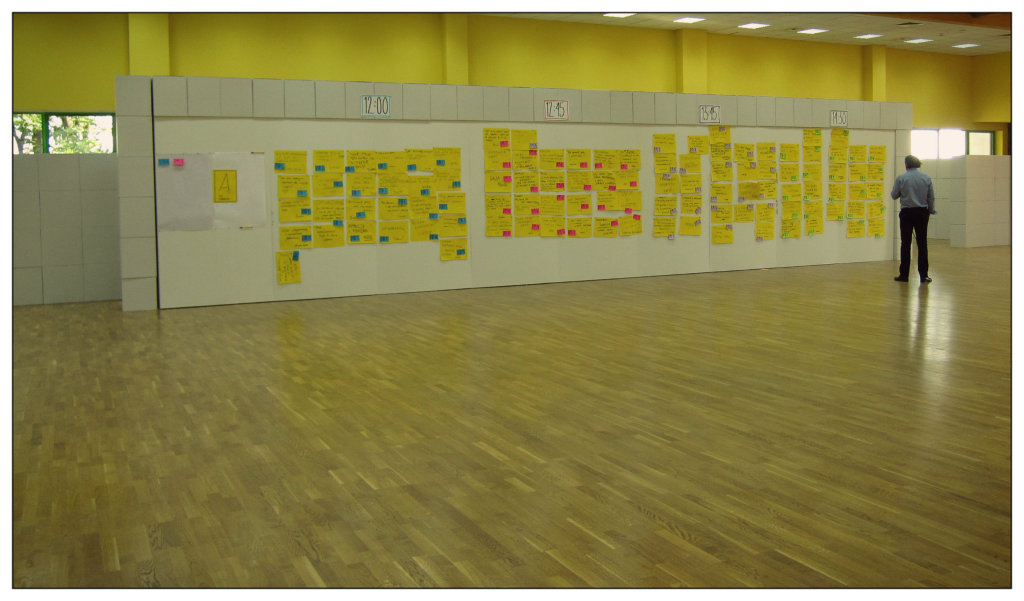 people were great and bold about advertising their sessions. here a session on “how to delegate and not abdicate” with an add on of “great conversation! going strong already since 12:05”. 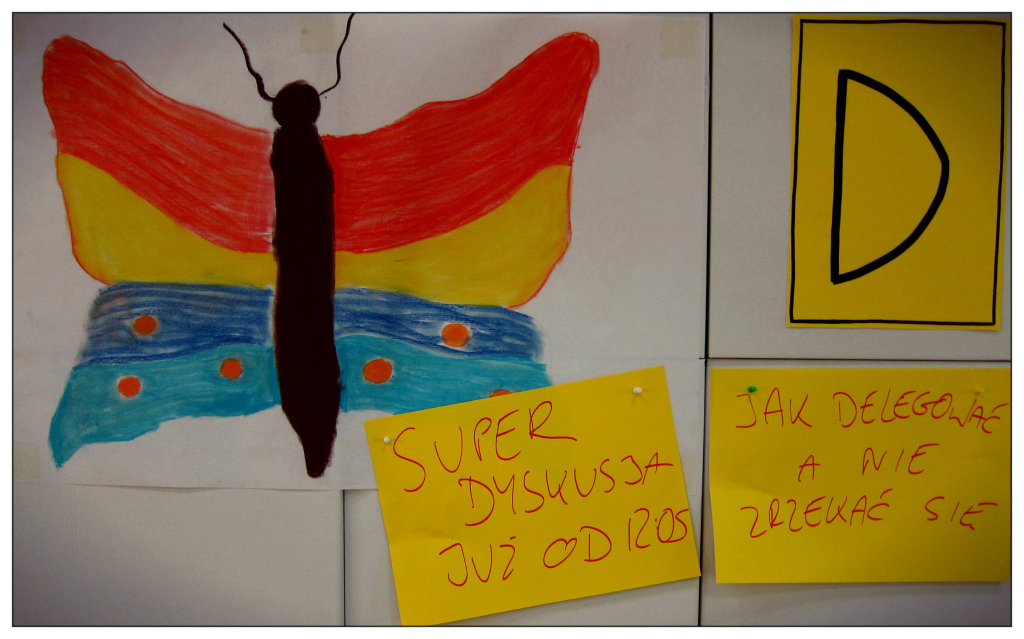 card-board boxes as walls allowed participants to be flexible on the size and setting of the group. 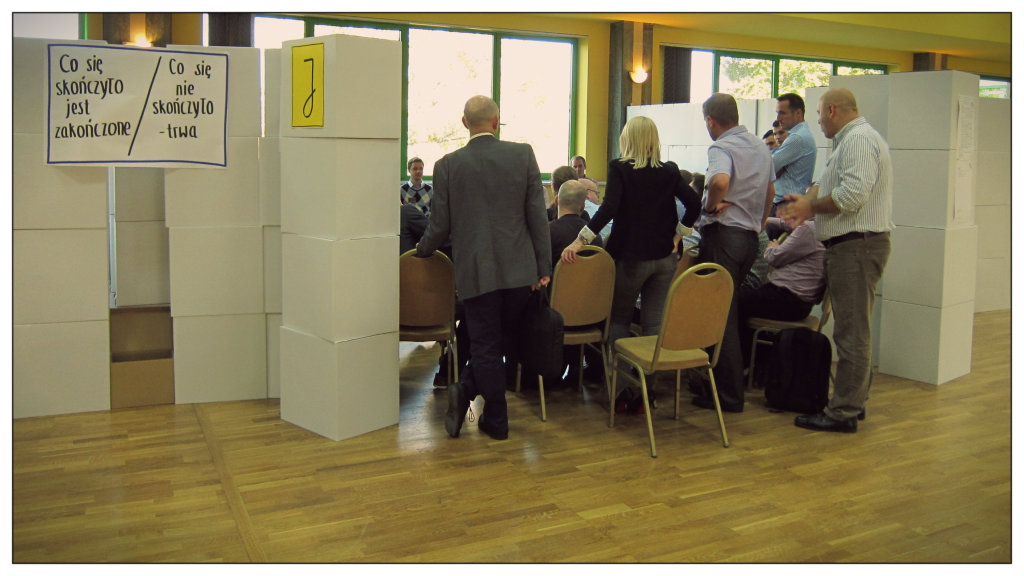 a report of over a 100 pages was produced the same day and sent as an e-documentation to all participants the very next morning. 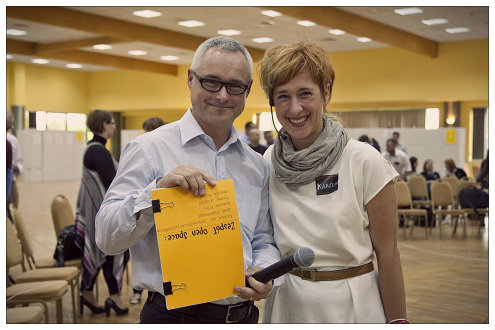 but the work was not done. together with a great colleague of mine, gilbert brenson lazan, we facilitated a harvesting session  for the HR department, using ToP elements. this resulted in a list of action recommendation for the board, one of them being an in-house leadership academy.

ps. if you are more a fan of videos – here a report from an OST event for an innovation hub – TECHNOPARK in gliwice, silesia, poland.

← dreaming – on a warsaw-berlin train.
collective learning with a large group →